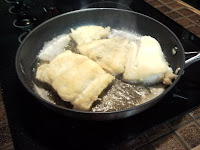 After a few weeks of experimentation, I've decided that a 50/50 mix of tapioca and potato starch works the best. Also, instead of fish, try calamari rings (cook a few at a time in several batches--as many as will fit side by side in the pan at a time).

Posted by Paul Chippendale at 3:12 pm